Operational Performance
The operation continues to focus on delivering improved performance while continuing to move strong volumes on the network. Overall velocity for cars and trains each increased slightly versus the prior week. With robust market demand across multiple business sectors, total weekly volume exceeded 212,000 units and was the second highest level recorded this year.

The average number of total trains held increased by several trains versus the previous week. Important maintenance and expansion activity, particularly along key portions of the Northern Corridor, has been a significant contributor to this average's elevated level in recent weeks, however, there are a variety of other planned or unplanned factors that can result in a train's movement being temporarily halted. While we would prefer to never hold a train for any reason, factors such as an interchange carrier not ready to accept a train or severe weather events can affect normal schedules. Our operating teams are always reviewing the causes of trains holding and seeking ways to lower this number as much as possible.

In the Pacific Northwest, BNSF and fire personnel have been addressing a wildfire that has impacted some traffic designated to move through central Oregon. The wildfire, which was reported Tuesday night a few miles south of the Washington/Oregon border, forced service to be suspended along a portion of our Oregon Trunk Subdivision, approximately 100 miles east of Portland. Some trains have experienced delays due to this disruption, however, traffic is moving again through this location while crews conduct frequent track inspections and continue to monitor conditions in the area. 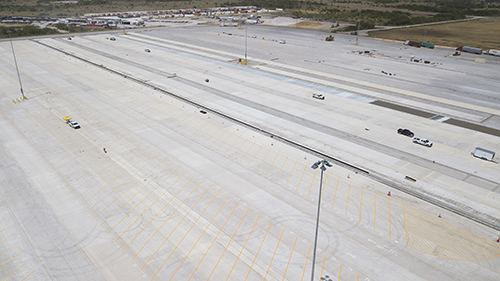 Other sections of the new lot will open in August and September. Alliance Intermodal Facility will offer approximately 1,340 additional parking stalls once the project is fully completed in September.

Service Expectations for the Week Ahead
Favorable operating conditions are expected across much of the network during the next several days.

During the upcoming week, network maintenance and expansion activity will continue across portions of our primary Northern Transcon route between Montana and the West Coast, which may cause some train delays during scheduled work windows.

In Texas, crews will continue their work on the major expansion project adding a nearly five-mile stretch of fourth main track to the Southern Transcon through Amarillo. The project, which began in February, remains on schedule for completion in September.

Below is a look at the key operational performance categories for the week ending July 19:

Total trains held for the week increased by nearly seven percent with an average of 109.9 trains held versus 103.0 trains held during the prior week.


Car velocity, measured in miles per day (MPD), was up by less than one percent at 208.7 MPD versus 208.1 MPD recorded the prior week.


Train velocity, measured in miles per hour (MPH), was up by more than one percent versus the prior week at 17.4 MPH.

Terminal dwell increased by more than two percent versus the prior week at 26.0 hours.