Operational Performance
BNSF operating teams are currently addressing some service challenges on our Northern Transcon resulting from a train derailment in Idaho. The derailment, which was caused by a rockslide, occurred Wednesday night near Katka, Idaho, approximately 120 miles east of Spokane. Track restoration work is ongoing, however, the remote location with no road access has required additional efforts by our crews and contractors. The main track is currently estimated to reopen this weekend. Some trains have been, and continue to be, re-routed to minimize the impact of this disruption. Once service has been restored, impacted customers may continue to experience delays to shipments until traffic flows have fully normalized.

Overall velocity and terminal dwell on the network have returned to the strong levels we reported prior to the holidays. As we move into January, velocity for both cars and trains is exceeding the monthly average from December, which was our highest in 2019. We remain focused on sustaining this strong performance as we move into the first full week of 2020.

Facilities Update
As a reminder, effective Monday, January 6, all in-gate and out-gate lanes (except for the far-right out-gate lane) will transition to only electronic J1 receipts at BNSF Automated Gate System (AGS) equipped facilities. As announced last fall, the upgrade to paperless receipts will support a more seamless experience on both in-gates and out-gates. Drivers using the BNSF RailPASS Mobile App for their gate transactions will immediately have access to a detailed, digital record of their J1 slip through the "J1 Reports" feature in RailPASS. 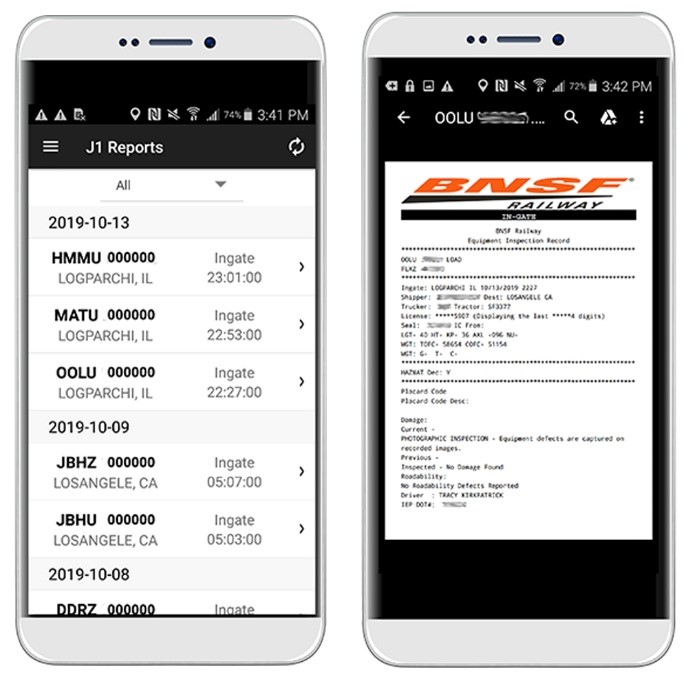 These electronic J1s will be available for drivers to download, save, email, AirDrop, etc. for a period of seven days after the transaction. If drivers require a printed J1 receipt for their transactions, they can use the kiosks in the Driver Assist Buildings.

Service Expectations for the Week Ahead
An active winter weather pattern will continue across our Northern Corridor during the upcoming week. Heavy rain and mountain snow is possible in parts of the Pacific Northwest this weekend, with high wind warnings in effect tomorrow across Montana. As always, BNSF teams throughout the region are monitoring conditions closely. No significant service interruptions due to weather are expected at this time.

Below is a look at the key operational performance categories for the week ending January 2:

Total trains held for the week decreased by nearly 49 percent with an average of 79.4 trains held versus 155.3 trains held during the prior week.


Car velocity, measured in miles per day (MPD), was up by more than eight percent at 211.4 MPD versus 195.5 MPD recorded the prior week.


Train velocity, measured in miles per hour (MPH), was up by more than six percent versus the prior week at 19.1 MPH.

Terminal dwell was down by more than eight percent versus the prior week at 25.2 hours.